​If you spent time commuting or traveling last January, you may have seen a large ad on the side of a bus or a poster
February 26, 2019 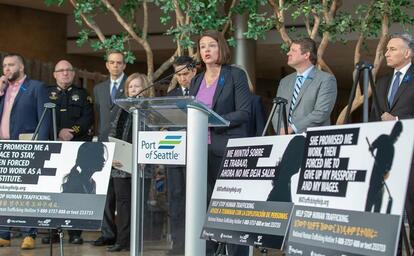 Port of Seattle Commissioner, Courtney Gregoire speaks at the press conference on Jan. 18, 2019.

​If you spent time commuting or traveling last January, you may have seen a large ad on the side of a bus or a poster in the airport with a simple, yet powerful message: Help stop human trafficking. These eye-catching posters and ads were part of a large-scale, unified public awareness campaign led by the Port of Seattle in conjunction with many regional partners from the government, nonprofit, and corporate sectors, all in an effort to help increase awareness during January for human trafficking awareness month. Ads and posters were placed all around SeaTac airport and the Port’s maritime facilities, as well as in regional buses, trains, health clinics, libraries, law enforcement offices, public defender offices, community centers, and in many business facilities. These signs, along with a press conference that resulted in 14 regional news stories, and a tremendous amount of chatter on social media, have helped the Port of Seattle and their partners reach an ultimate goal—to raise awareness about what human trafficking can look like, and to teach the public how to help if they witness a trafficking situation.

The purpose of the campaign was to provide human trafficking reporting resources to as many Washingtonians and visitors to our state as possible, and to urge victims and survivors to reach out for assistance. The ads and posters were made in English and multiple other languages. Each included the number for the National Human Trafficking Hotline (888-373-7888, text number 233-733) and a local website that serves as a comprehensive resource for anyone in Washington who is being forced to perform work against their will (WATraffickingHelp.org).

“We believe this is the first time in the country that a major city, county, Port, transit and private sector agencies have come together on this very important topic,” said Port of Seattle Commissioner, Courtney Gregoire at the press conference.

In addition to the leaders who spoke at the press conference, many western Washington cities, local nonprofit agencies, and regional public and private enterprises came together to help support this campaign and make it a success.