Visionary business leaders know how to inspire others.
June 18, 2018 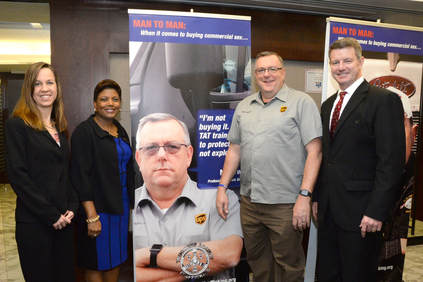 Visionary business leaders know how to inspire others. They see windows of opportunity within their company and know how to achieve solutions that bring positive change. Their success is an example to other professionals of how much can be accomplished if you dream big, develop relationships, and persevere.  This is certainly the case for Nicole Clifton, Vice President of Global Public Affairs for UPS. Clifton spearheaded the implementation of a new workplace policy against human trafficking at UPS, and she led the effort to provide human trafficking awareness training to more than 96,000 UPS employees nationwide.

​Clifton first became involved in the issue of human trafficking in 2013, when the State Attorney General of Georgia contacted UPS to help sponsor billboards for a human trafficking public awareness campaign in the Atlanta area. At the time, Clifton was not fully aware of the scope of the problem. She contacted a few human service agencies in the Atlanta area who specialize in working with victims, and she began to understand the importance of fighting this global crime. Clifton recommended that UPS sponsor the awareness campaign, but was also convinced that the company could do much more than simply write a check.  She lobbied for and received the support of senior UPS leaders to institutionalize several key practices to make a difference.

Clifton’s first goal was to strengthen the company policy to clearly prohibit using company resources to further human trafficking in any form. “UPS values are clearly stated in our Policy Book and Code of Conduct.  It made sense to start with a strong, clear policy that employees could easily access,” said Clifton.  She previously worked in the UPS Legal Department and reached out to those colleagues as well as others in Compliance and Human Resources to collaborate on the policy. Clifton found a colleague in Human Resources was familiar with the issue after having attended the Carter Summit on Human Trafficking in Atlanta in 2015 where BEST’s Executive Director, Mar Brettmann, led a two-day conversation with business leaders to help them adopt policies and best practices to prevent trafficking.

Clifton had to navigate many layers of management and build internal champions throughout the process. “Creating policy changes takes time, particularly in large companies.  There are many things to which we could devote attention and resources, so it was critical to personally reach out to the various stakeholders, educate them and listen to their concerns about the best way to move forward,” Clifton describes.  “I also had to be patient, because timing is everything when you are pushing for change in an organization. Patience and persistence paid off.”

It took six months to finalize the new workplace policy, which was ultimately approved and is now easily accessible on the internal UPS employee compliance and ethics website.  “A few weeks ago, one of our customers requested that we complete their survey which audited their suppliers on anti-human trafficking measures.  It was gratifying to be able to confirm that we already have our own policy and to know that our customers value this issue as well,” said Clifton.

Training an Army of Drivers

After implementing the workplace policy, Clifton believed the next logical step was to educate UPS drivers about the problem of human trafficking, to train them to look for red flags and provide a resource to anonymously report concerns.  UPS has more than 100,000 drivers who are already trained to be aware of their surroundings and operate safely in their community.  Engaging the company’s human capital made sense.  Clifton worked with the operations team for UPS Freight based in Richmond, Virginia to develop a small test pilot group of 1,500 drivers throughout 10 US cities. “I asked for UPS Freight because human trafficking often takes place at truck stops and travel plazas and I thought these drivers would be in a position to see something and report it,” Clifton explained.

Clifton discovered that UPS had an employee on the Board of Truckers Against Trafficking (TAT), a Colorado based non-profit dedicated to raising awareness in the trucking and logistics community.  She also discovered that TAT had already been working with UPS drivers in small isolated groups and this provided an ideal opportunity to scale the program.

TAT customized their human trafficking awareness curriculum by creating DVDs and a webinar training.  Clifton relied on local UPS human resources and operations teams to rollout the messages and distribute TAT’s wallet cards that list warning signs and a phone number to report suspected trafficking activity. The UPS Freight pilot training went so well that many of the UPS drivers started voluntarily handing out wallet cards to other truckers at truck stops along their routes.

When Clifton reviewed the results of the test pilot with the U.S. Operations President, he was so impressed that he gave her the green light to take the initiative nationwide to more than 101,000 UPS Freight and city drivers around the country.  He also recommended training UPS pilots who are in airports around the world every day and can also be allies in the fight.
​
UPS has extended training to approximately 96 percent of their 101,000 drivers nationwide and they are working on a plan to train their newly hired drivers.  The feedback from UPS employees has been phenomenally positive, and UPS is expanding efforts to help more, including working with the United Way on community-based training and hiring human trafficking survivors in partnership with an Atlanta based non-profit, Wellspring.  UPS has also partnered with the Department of Homeland Security’s Blue Campaign and is working on an awareness program for UPS pilots.
​
Today, thousands of UPS employees know the signs to look for and know what they can do to help. Nicole Clifton’s perseverance has positively impacted the culture of her company and positioned UPS as an example for other companies. More importantly, though she may never see their faces or hear their stories, Clifton hopes that through UPS’s efforts, lives will be saved and restored for the better.