​If there is one industry that has eyes across the country, it’s the trucking industry.
March 12, 2018 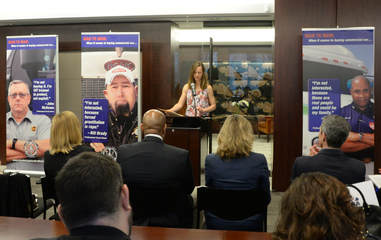 If there is one industry that has eyes across the country, it’s the trucking industry. Its web of truck drivers stretches across the US, constantly moving and communicating in ways that can reach far into the daily lives of citizens. This puts truckers in the unique and important position to see all, hear all, and to be able to advise each other on the issues that matter, including the problem of human trafficking. In February, BEST supported Truckers Against Trafficking (TAT) and the American Trucking Association (ATA) to launch the new “Man to Man Campaign.” The campaign is engaging some of the best professional drivers in the trucking industry who are sending out a message, loud and clear—that if there were no demand for purchased commercial sex, then sex trafficking would not exist. These men are encouraging other men to say NO to the crime of domestic sex trafficking, and instead they are urging their fellow truckers to keep an eye out to aid in the recovery of women and children who have been forced into this horrendous crime.

“At the very root of the sex trafficking and sexual exploitation epidemic sweeping our nation and world is the demand,” said Truckers Against Trafficking Deputy Director, Kylla Lanier. “The prostituted person, and more recently, the traffickers have been the focus of attention and arrests, while the buyer goes home with a warning. This must change. Traffickers meet the demand for commercial sex by luring their victims into this life and keeping them there through force, fraud, or coercion. If there were no money to be made, they wouldn’t pursue this criminal activity.” Lanier adds, “When all is said and done, if there is no buyer, there would be no victim.”
​
Commercial sex buying is one of the biggest problems today. In the market of sex trafficking, there are sellers (traffickers), buyers, and victims. Basic economics shows that demand is the most fundamental thing that drives market survival. Without a demand for purchased sex, there would be no sex trafficking victims. The Man to Man campaign takes a much-needed approach to helping eradicate sex trafficking by focusing on having men influence other men to remove the demand.