PDX BEST was launched with an Award Luncheon on February 28th at the West End Ballroom in Portland, OR!
March 21, 2017 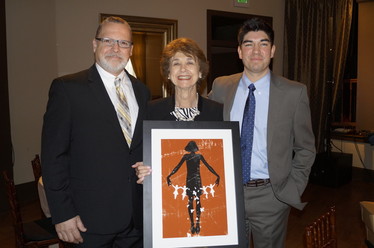 PDX BEST was launched with an Award Luncheon on February 28th at the West End Ballroom in Portland, OR! The launch event was sponsored by Multnomah County, Multnomah County District Attorney, the Epik Project, and the Junior League of Portland. Thanks to the support these organizations, over 100 people were in attendance. Dr. Mar Brettmann, Executive Director of BEST, and Ngoc Nguyen, BEST Program Manager, attended the event along with local politicians, law enforcement officials, service providers and, most importantly, local business leaders.

The West End Ballroom is a beautiful, historic building in downtown Portland. The reception area featured an art exhibit inspired by the issue of sex trafficking. In the ballroom there were more than a dozen round tables decorated with flowers and a paper cutouts of a children holding hands, reminding the guests that the age of entry into sex trafficking is often as young as 13-15 years old.

Former Commissioner of Multnomah County, Diane McKeel, received an award for the incredible progress that the county made due to a commitment to sex trafficking prevention. Both Former Commissioner McKeel and Tom Perez, the driving force behind PDX BEST, welcomed businesses to join the broader movement to end sex trafficking in Portland. Thanks to this event, the first Portland business has joined the BEST Employers Alliance and many more are anticipated.
​
Dr. Brettmann said, “I am especially thankful to Tom Perez and Multnomah County for their commitment to help businesses leverage their unique position as marketplace influencers in raising awareness regarding trafficking and sexual exploitation, and providing effective, sustainable solution to this crisis.”